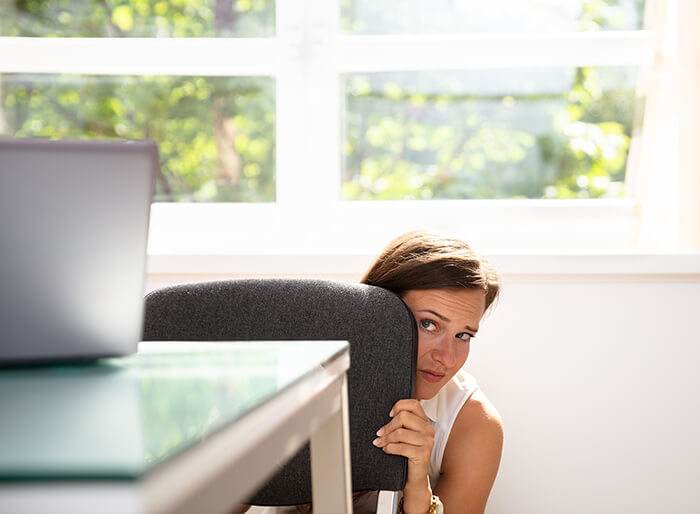 A few years ago, I discovered a word that described what I had felt, and still feel on occasion, during most of my legal career: “Imposter Syndrome.”   It’s actually not a new term at all and has been around at least since the 1970s. But the term is new to me and explains so much about how I, and countless others, have felt practicing as a lawyer over the past 35 years. ﻿“At its heart, imposter syndrome,… refers to people who have a persistent belief in their lack of intelligence, skills, or competence.” Young Ed.D, Valerie. The Secret Thoughts of Successful Women (p. 16). Crown. Kindle Edition. The imposter syndrome is not limited to lawyers, and while its focus has been on how this affects women, men also are affected.

Imposter syndrome shows up in a number of ways: perfectionism, feeling destroyed by even constructive criticism, or waiting to be “found out” that you’re really not as smart or capable as others think (especially the ones who hired you, gave you that award, or wrote accolades about your many achievements).  It generates a pervasive feeling of fear, which prevents you from asking for needed help or mentoring, afraid that if you do, “they” will realize how stupid you really are.

Imposter syndrome prevents us from appreciating our value and forbids us from even entertaining the possibility that nailing the presentation, winning the case, getting the job, or winning the award was the product of our hard work, creativity and yes, intelligence. It reinforces our self-doubt when we fail to meet the impossibly high standards we set for ourselves to make sure that no one discovers how incompetent we really are.

As a result, we don’t ask for the raise or apply for that new position. We don’t take on the challenging cases or big projects. We stay small and limit ourselves so that we can keep the people in our world from finding out that we really don’t deserve to be in the position they see us in. And the worst? It deprives us of the joy in getting just and fair results for our clients, whether in a criminal trial, civil litigation, or administrative proceedings.  It prevents us from enjoying and acknowledging well deserved praise and respect from our colleagues. It is impossible for us to derive meaning from our work, a key component to our well-being, if we feel we shouldn’t be there in the first place.

For me, it was in law school when fellow students began to talk about their careers after graduation. I had never once considered applying for a job in a big law firm because I knew I just wasn’t smart enough. (I only got into one law school that I applied to.) I closed that door and locked it tight. Later on, in my practice as a solo practitioner, I would be terrified of court proceedings, just knowing that the judge and opposing counsel would realize that I didn’t know what I was doing.  I was too scared to ask for help because I knew that a fellow attorney would realize how stupid I was and wouldn’t want to waste time helping or mentoring me.

In the area of Immigration law, where I have been in the last 22 years, it was even worse. With constant change in the laws and regulations, policy memoranda and procedures, honestly, I felt the Imposter Syndrome for a long time, even up until a few short years ago. I just knew that my clients would figure out that I had no idea what I was doing. I just knew that one day at an immigration interview an adjudications officer would ask me a question that I could not answer while my client looked on in shock, or that a denial letter would come from USCIS because of a mistake I had made and the client would have to leave the U.S. or worse, be deported.

How to overcome Imposter Syndrome with EFT “tapping“

EFT, or tapping, as it is commonly called, provides a way to examine the beliefs and emotions around our individual version of the Imposter Syndrome. Often called “emotional acupuncture,” tapping on various acupuncture points while focusing on specific events that reinforce our beliefs about being a fake, a fraud, or not good enough, will help to clear the negative emotions and change those beliefs about ourselves.  If unfamiliar with tapping, you can read about the techniques, including the science and research behind EFT here.

In the case of Imposter Syndrome, EFT can help reduce the day-to-day fears over making a mistake; or being criticized by a supervisor, opposing counsel, judge or client. Tapping can relieve the feeling of being overwhelmed by the amount of time spent working in order to avoid making even one mistake, changing the belief that everything must be perfect. It can work on something as simple as the fear of making a phone call (the subject of an upcoming blog). EFT tapping can open the door to new mentoring relationships, as well as personal and professional growth by eliminating the fear of asking for help. Best of all, tapping can bring new meaning and purpose to our work by working to change those core beliefs of not being good enough, or not belonging.

If you are one of countless people who hold beliefs that are part of the Imposter Syndrome, you can change your beliefs and open up a whole new world for your practice through EFT.

Sharon Ames, Esq. is a practicing attorney for over 35 years and a certified EFT practitioner with EFT International. She is dedicated to creating inspired lawyers through reducing stress, anxiousness and feeling overwhelmed by the demands of practicing law. She works with clients individually or in groups (workshops and presentations), in-person or via Zoom.

Chat with Sharon
← WOMEN LAWYERS AND THE NEXT PHASE OF COVID-19: EXHAUSTED, ANXIOUS AND OVERWHELMED LAWYER WELLNESS WEEK: “TAPPING” WHEN YOU ARE FEELING OVERWHELMED →