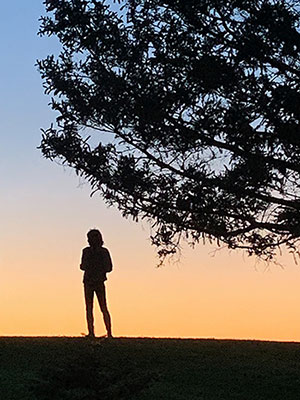 HOW THIS LAWYER FOUND EFT

In the late 90s, as a family law practitioner, I decided I’d had just about enough of trying to do the impossible: getting people divorced in a civil manner, trying to resolve deep family issues in the context of a family court proceeding, or getting financial information from a self-employed expert at hiding income. No one was happy, I often didn’t get paid enough, and the participants, including the lawyers and judges, were often combative. While there were and are phenomenal attorneys out there who thrive in the practice of matrimonial and family law, I was not one of them. I had to resist being dragged into my clients’ cases emotionally, setting boundaries that were sometimes difficult to enforce- I am human, after all.

I switched my area of practice.

I thought that changing my practice to a new area of the law would take me away from the “matro blues” , so I joined the American Immigration Lawyers Association in 1999 and focused my practice exclusively on Immigration. Little did I know that by entering the field of immigration, I basically went, as they say, out of the frying pan into the fire.

Practicing in immigration is stressful, to say the least, and is more often just plain toxic. Diving into a field where a seemingly minor error can result in the removal of your client from the United States was emotionally and physically draining. I spent many sleepless nights worrying over filing deadlines, filing the correct form or any of a host of errors that could hurt my clients and for which I would be squarely to blame. It was at least five years in (more like ten) before I could really look in the mirror and feel confident in calling myself an Immigration Attorney.

The stress continued to grow.

As challenging as immigration law was (and is), I, like most immigration attorneys, felt inspired by being able to help my clients in a way that I had not experienced in other areas of the law, such as saving them from deportation or getting them a green card after years of struggle. Nevertheless, the stress was always there. Add to that the pressures of managing a law practice, worrying about getting paid, paying the bills and getting actual work done, and I was back into my favorite ways to take the edge off, from having those one or two daily IPAs after work (and of course more on Friday nights), to having an occasional drink at lunchtime with a colleague.

Too much to handle.

Personal matters added to the work stress, going through a divorce and becoming a single mom to my three children. The challenges of trying to “coparent,” attend the kids’ games, concerts, and yes, feed them, was often overwhelming. This also meant I had to squeeze in work time late at night, early in the morning, or on the weekends. I often thought of quitting the practice of law completely, but the known stress of being a lawyer was less frightening to me than contemplating the unknown- a career outside the law. Running was my salvation at the time, but I couldn’t just go out the door for a run every time I felt stressed. I continued this way for another ten plus years, commiserating with other attorneys and resigning myself to the idea that this is what lawyers do. As long as I had someone to have a drink with, I could deal with that.

The turning point for me came around eight years ago, as my sisters and I were seeking alternative ways to treat a family member’s multiple serious health conditions. In this exploration, I discovered EFT. At the time, I had no idea the profound effects this weird thing called “tapping” would have in my own life.  My sister showed me a video by Nick Ortner. People were tapping on their heads and talking out loud about their problems. Honestly, it looked pretty weird, but at the same time, I had been studying various methods for bringing the body and mind into balance to help me address the myriad of stressful things in my life, so I decided to try it out. What I found was nothing short of life changing.

Once I began using EFT, I was able to relieve the immediate emotional intensity of any issue that was particularly troublesome at any given moment. Before, my focus when leaving the office every day was having a drink. After starting with EFT, I arrived home in a calm state with more energy. The desire to have that IPA was gone.

Before, I was constantly worried about finances and often procrastinated in paying bills, billing clients and managing my practice. After, when I used tapping to give me the confidence and willingness to attend to those critical activities, addressing my finances became a task that allowed me to celebrate the success of my practice. When I was at the end of my rope and wanting to leave the practice altogether, EFT helped me to clarify who my ideal clients were and have a vision for how I wanted to practice law going forward.

Now when I encountered daily stresses, I had a healthy way to cope. I tapped on issues surrounding difficult clients, giving me a calm and more thoughtful way to respond to their demands. I tapped on all of the ways I felt about certain situations with colleagues or judges that put me over the edge on any given day.

Thanks to EFT, I now enjoy the practice of law in a way that I never did. The clarity I gained using EFT allowed me to make decisions about my practice and training that led me to the job I have today, the job I love, in the area we call “Crimmigration.”

Having studied EFT extensively and after pursuing a rigorous certification program, I now welcome the opportunities to connect with other attorneys, to provide relief in a way that did not exist in those stressful years when I was raising kids and trying to hold it all together. My only regret is not having discovered EFT decades earlier in my life! I could have been a better parent, lawyer, and a much happier person. I celebrate the changes I have made using EFT and rely on its power to keep me healthy, relaxed and inspired. Everyone deserves this opportunity and I am passionate about sharing this with anyone who does not wake up each morning excited about the possibilities of a new day.

Sharon Ames is a certified EFT practitioner with EFT International, dedicated to creating happy lawyers through reducing stress, anxiousness and feeling overwhelmed by the demands of practicing law. She works with clients individually or in groups (workshops and presentations), in-person or via Zoom.